← more from
Bastard Jazz Recordings
Get fresh music recommendations delivered to your inbox every Friday. 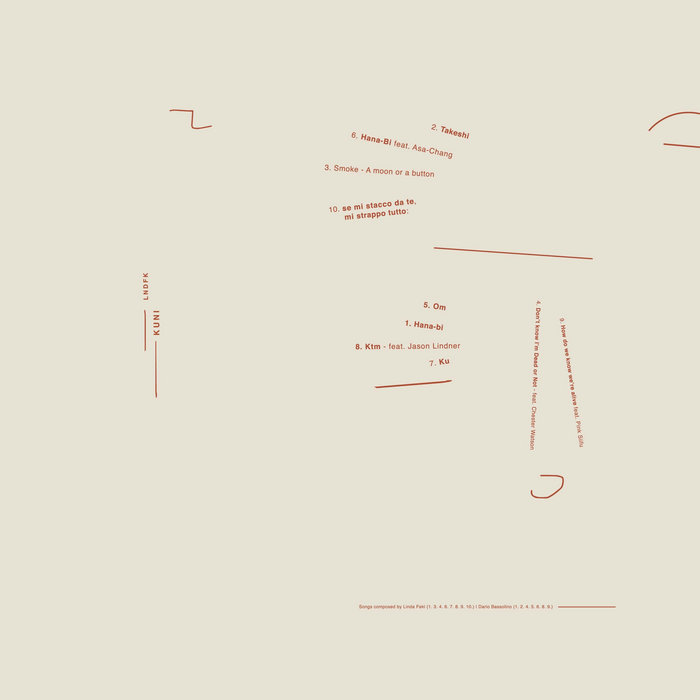 LNDFK (aka Linda Feki) presents her ground-breaking debut album, “Kuni” on Brooklyn-based Bastard Jazz Recordings. Undeniably on the rise after her 2019 breakout performance at Primavera Sound, LNDFK has already caught the attention of Pitchfork, Rolling Stone, Clash Magazine, Noisey, and Brooklyn Vegan (among many others) while being championed by the likes of Gilles Peterson, Tom Ravenscroft, and Jamz Supernova & landing spots on tastemaker playlists like Spotify’s “Pollen” and “Fresh Finds.”

“Kuni” is a spellbinding exploration of dichotomies: Love & Death (Eros & Thanatos), Flower & Fire, Delicacy & Violence, Poetry & Realism, Purification & Destruction. These opposites are reified in the 10-track LPs multifarious and multifaceted sounds, elegantly meandering through a variety of styles and genres, spearheaded by Linda and features the production wizardry of Darrio Bassolino who co-wrote the album.

“Kuni” opens with “Hana-bi,” an ambient instrumental piece that sets the tone for the album. Inspired by the Takeshi Kitano 1997 film of the same name – particularly Joe Hisaishi’s stunning soundtrack, as well as Kitano’s paintings which appear in the film. “Hana-bi” expresses the dialoguing opposites of flowers and fire, the first of many dichotomous representations throughout the album. “Takeshi” acts as an extension and to “Hana-bi,” albeit one of opposing sound, with its driving, highly syncopated drums (which reappear throughout “Kuni”) – à la Karriem Riggins, Questlove, or Yussef Dayes – frenetic bass line, and jazz chords. Linda’s sultry voice is interspersed, initially jumping around in scat fashion, being triggered as if a sample, before her lyrics come in; her vocals are used like an additional instrument, adding to the song’s rich texture. “Kuni” truly hits its stride with the next song, “Smoke – a moon or a button” (its title lifted from the 1959 book by Ruth Krauss and Remy Charlip), which is structured like a jazz standard yet flows into neo-soul territory sonically with those prodigious drums a highlight once again.

LNDFK touches on experimental hip hop in two songs on the record (both of which were released as singles in 2021): “Don’t Know I’m Dead or Not (feat. Chester Watson)” – track #4 – and “How Do We Know We’re Alive (feat. Pink Siifu)” – track #9. Although they embrace a more hip hop-leaning sound, these songs by no means shy away from the exploratory theme, and feature two of the alt-rap scenes rising stars with Chester Watson and Pink Siifu who offer provocatively impressing verses, combining dense word play with unconventional flows. While these tracks may first appear to be outliers on the album, they are undeniably in tune with “Kuni’s” message and sonic palette, acting as testaments to LNDFK’s willingness to explore and experiment.

Meanwhile, “Ku” – the third and last single before the album release – furthers the pre-established future soul sound while meandering through nu jazz and left-field electronic. Inspired by the graphic novel and film, “Sin City,” and its female assassin protagonist Miho, “Ku” is a musical interpretation of Miho’s story, incorporating both her beauty – the first half of the song – and murderous tendencies – the second half – to create a stunning juxtaposition, culminating in an ambient finale that suggests the character’s vulnerability and inner peace. The song gracefully bridges the gap between Hiatus Kaiyote-esque songwriting, Dilla’s rhythmic syncopation, and Thundercat’s instrumental prowess (LNDFK has shared a stage Brainfeeder labelmate Kamasi Washington).

Mixed in throughout “Kuni” are a series of instrumental pieces that function as something akin to an interlude. The aforementioned intro, “Hana-bi,” and the album closer “se mi stacco da te, mi strappo tutto:” act as bookends, while “Om” indicates the half-way mark, and “Ktm” sees Jason Lindner add his sound the album. These tracks are the ambient foundation of “Kuni,” representing the thematic duality of the work. Clocking in at only 24 minutes, “Kuni” packs an astonishingly diverse array of sounds, styles, and themes, all while showcasing virtuosic musicianship and instrumental prowess.

Appearing on “Hana-bi” and “Ktm,” renowned international artists Asa-Chang and Jason Lindner add an additional perspective to “Kuni”: Asa-Chang on “Hana-bi,” and Jason Lindner on “Ktm.” Asa-Chang - famously of the Japanese avant-garde group Asa-Chang & Junray - provides vocals and percussion to an alternate version of the instrumental opener, while the acclaimed keyboardist Jason Lindner offers his synth expertise on “Ktm.” These features highlight the spirit of collaboration found in LNDFK’s music, always willing to try out new ways of working.

LNDFK is a singer and songwriter, born of two cultures – an Italian mother and Arab father. She grew up in Naples, away from her father, the Sahara, her homeland and traditions, which has helped nourish the desire to rediscover – through art – an engagement to her roots. Her music melts with jazz, neo-soul and hip-hop influences, filtered through her experiences and sensibility.

Her first EP, "Lust Blue," was composed with the artistic production of Dario Bass and released by Feelin' Music; after that she released several singles that saw international radio support (BBC, NTS, Wordwide FM) and gained a massive audience on digital platforms. Together with her band, she toured around Europe, performing alongside such notable artists as Kamasi Washington and Mndsgn, among others. Most recently she toured Italy, and performed at Primavera Sound Festival 2019 in Barcelona.

“Kuni,” is due out on NYC label Bastard Jazz Recordings in February, 2022, while the vinyl LP will follow shortly after.

Half-Italian, half-Tunisian. Debut LP out on the next fall via Bastard Jazz

Bandcamp Daily  your guide to the world of Bandcamp